Things to do on Lookout Mountain in Alabama 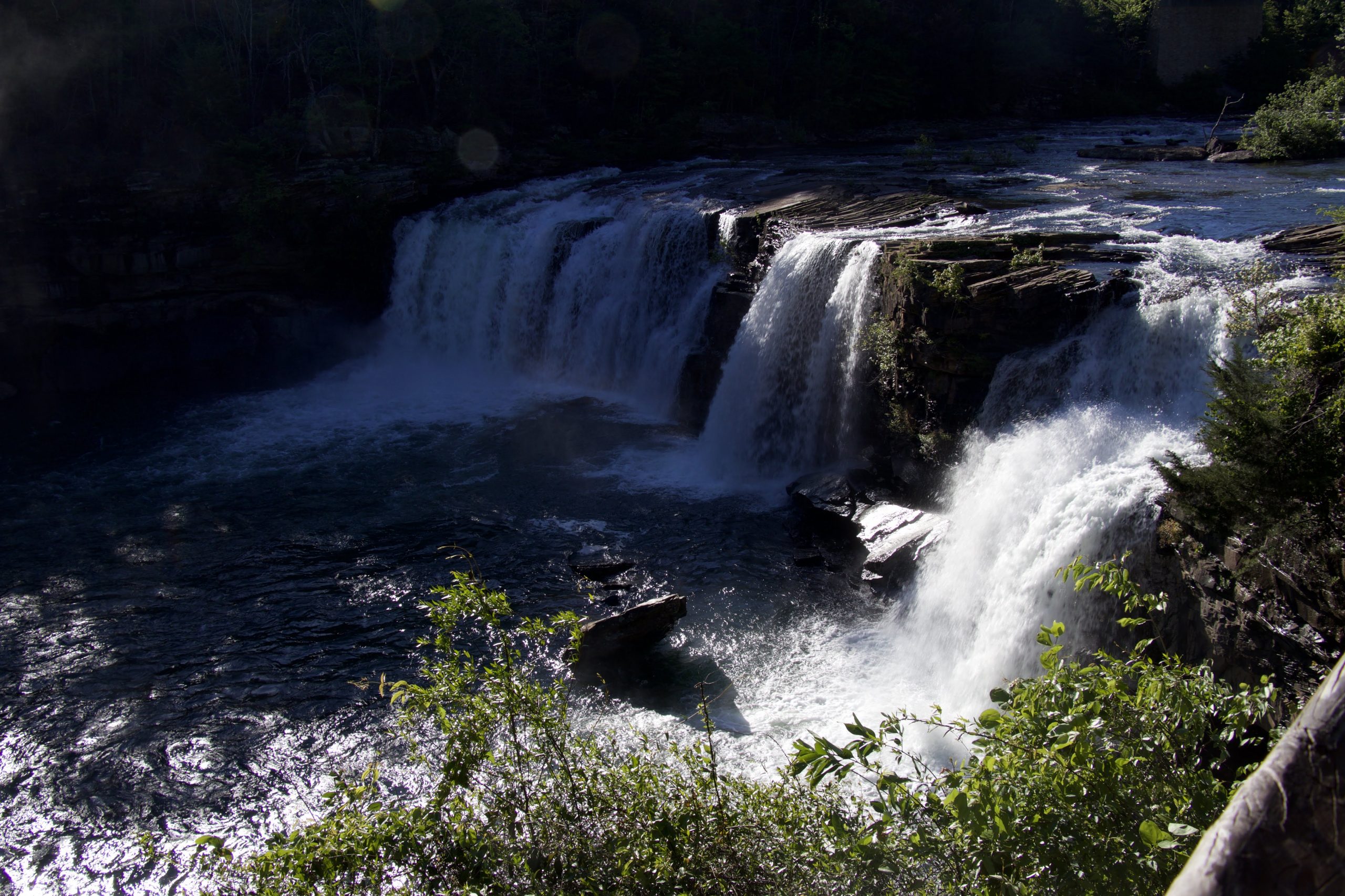 23 May Things to do on Lookout Mountain in Alabama

Things to do on Lookout Mountain in Alabama

There are plenty of exciting things to do at Lookout Mountain in Alabama. My first visit to Lookout Mountain was with the girl scouts when I was 15 years old on a trip to Chattanooga, Tennessee. At the time, I did not know that the mountain sits on the corner of three states, Georgia, Alabama, and Tennessee.

There is a marker in Rock City claiming that seven US states could be seen from that point. The states are Tennessee, Kentucky, Virginia, South Carolina, North Carolina, Georgia, and Alabama. I remember standing at the lookout, but I was afraid of heights at the time, so I had to take everyone’s word for it that what the marker said was true. 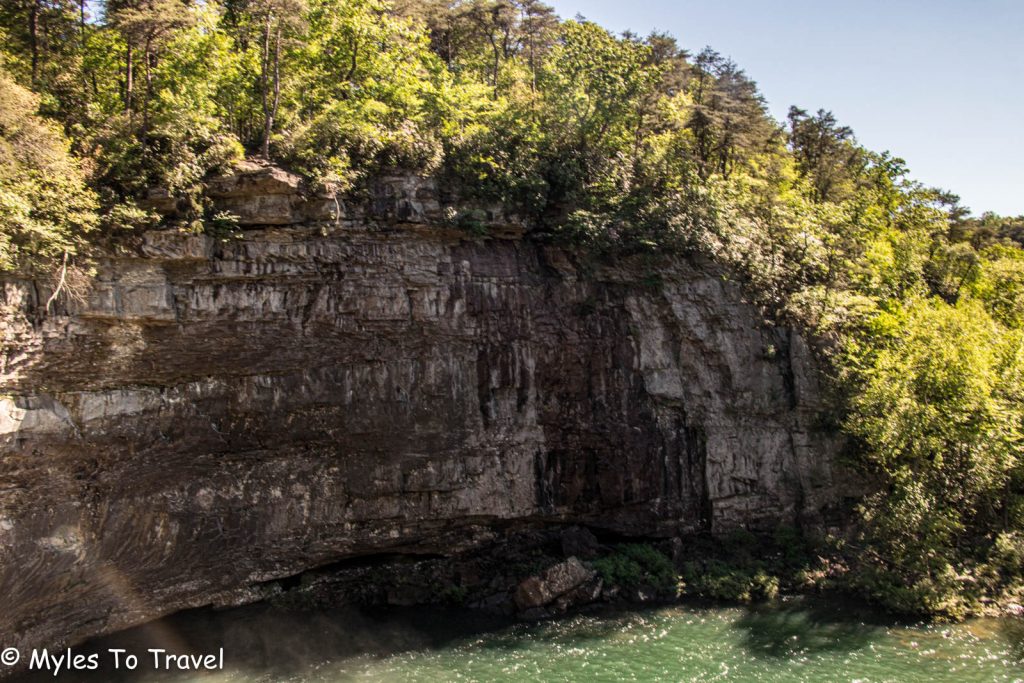 Fast forward almost thirty years, and I was attending the Travel Bloggers Exchange (TBEX) Conference in Huntsville, Alabama. One of the perks of being at the event is you get the opportunity to go on what is called a FAM (familiarization) trip to other parts of the state.

After the conference ended, I was headed to spend two days visiting Lookout Mountain and some of the surrounding cities. The organizer promised to introduce us to breathtaking landscapes, meet artisans, and explore the rich cultural heritage that Lookout Mountain offers.

Before leaving Huntsville, I mentioned to one of the locals that I was going to Scottsboro, Alabama, and Lookout Mountain at the end of the conference. I was surprised when he told me not to go. When I asked him why he said because I was black. I knew about the history of states in the southern part of the United States.

I didn’t know what to think about this information. The team from TBEX knew I was black; the marketing team at Unclaimed Baggage, who was in charge of organizing the event, knew I was black. I kept the information to myself and planned to go anyway.

On the day of departure, a few of us gathered in the hotel lobby, waiting for the van to take us to our first stop in Mentone, Alabama. By the time the car was full, I had looked around and noticed that I was the only black person in the van. I thought back to what the driver had said. We left Huntsville and headed north to a restaurant for brunch.

Mentone is located at the top west brow of Lookout Mountain in Northeast Alabama in Dekalb County.  The town is filled with great food, art, and nature, all within a short drive from each other. The meal started to arrive, and a few more bloggers showed up. I was more at ease that I was no longer the only black person in the restaurant. 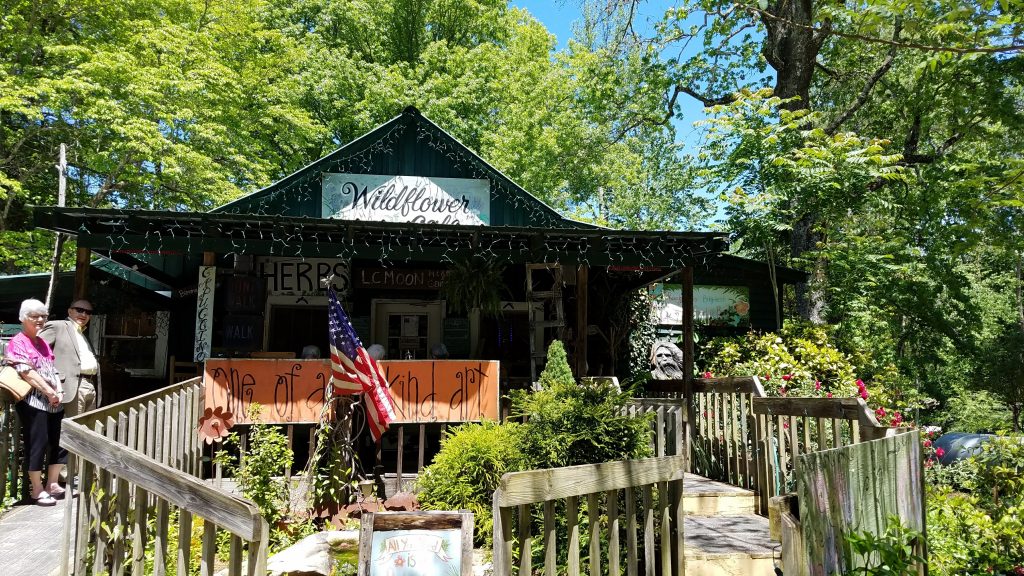 We at brunch at the Wildflower Cafe in Mentone.  It was voted best cafe in Alabama and made the list of 100 places to eat before you die.  The cafe has a unique variety of southern cuisine.  The most popular dish being tomato pie.  I guess I can die happy because I have had the pie, and it was worth the trip. 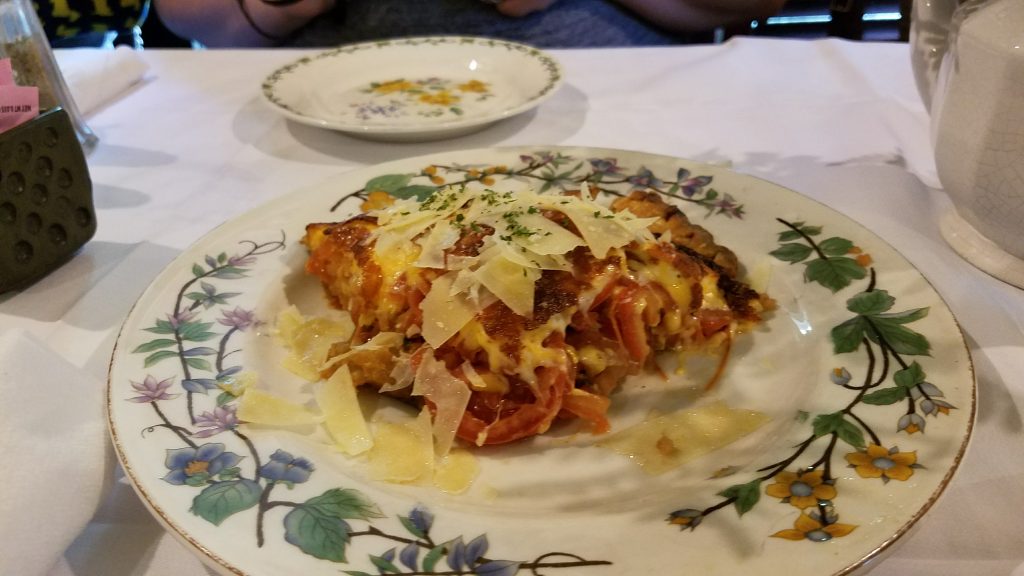 The menu included shrimp and grits, strawberry crepes, and mashed potatoes, and I wasn’t able to personally try the shrimp and grits because of a shellfish allergy; judging by the empty bowls that were left, I’m going to conclude it was good.  The staff was very accommodating in making vegetarian options for those of us who don’t eat meat. 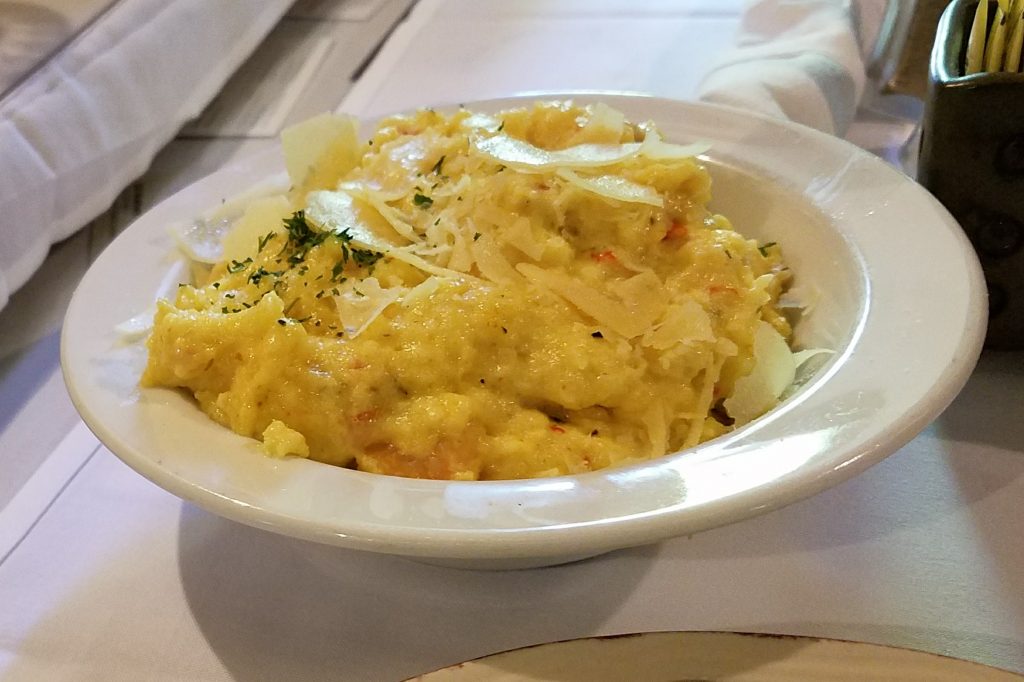 Our next stop was at the Kamama Gallery. The gallery, cafe, and spa are operated by Ray Padgett and his wife, Sandra. You can find many paintings, photographs, sculptures, textiles, and more from various artists who currently live on Lookout Mountain. All of the artworks are for sale. 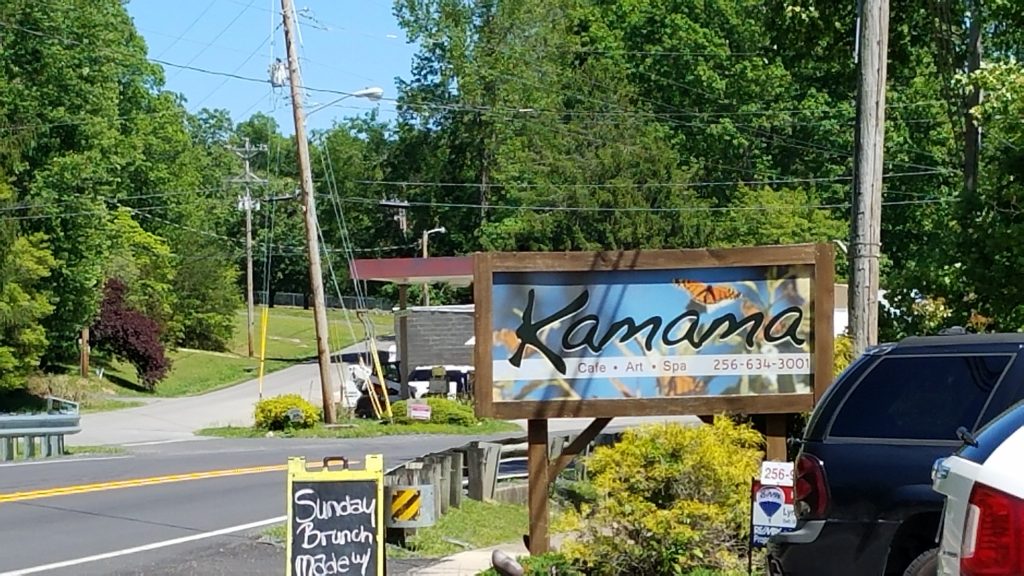 During our visit, we found out that Ray was also a writer. He wrote a children’s book titled the Grinning Possum.  If you look closely, there is a slight resemblance between Ray and the possum, although Ray disagrees. 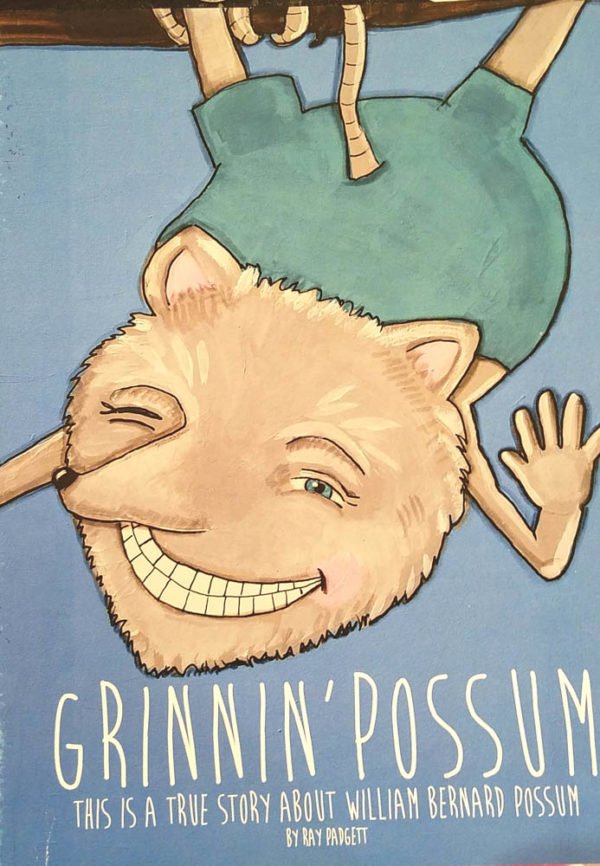 We also received some relationship advice from the couple.  When someone asked what is the secret to being married for over 30 years.  Ray said it was that Sandra was always right.  Sandra said the secret was learning to compromise. 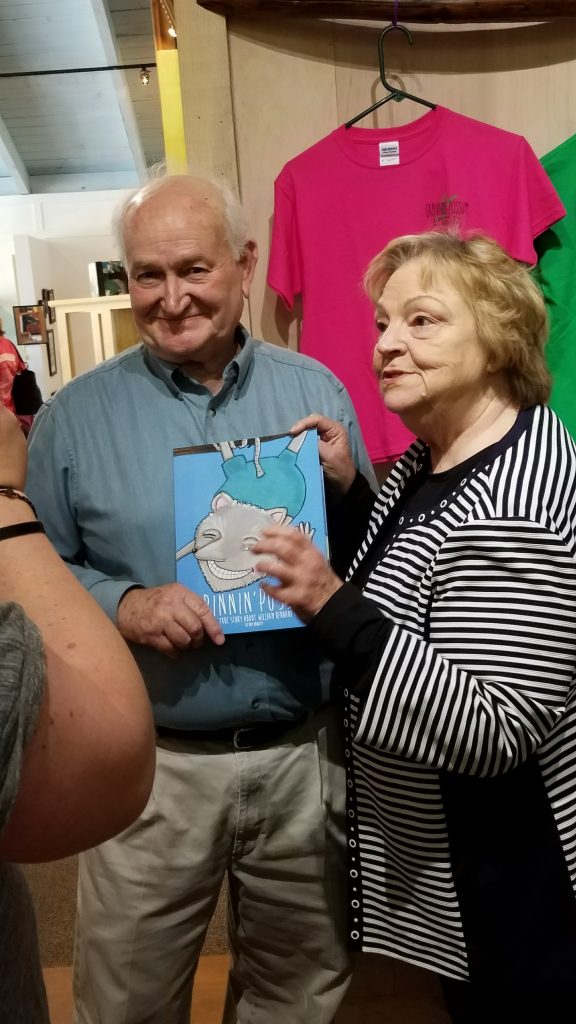 The couple is involved in the fundraising for building the Mentone Arts and Cultural Center.  The center is for the local artists to learn and have a place to perform and showcase their work.

Miracle Pottery Art Gallery is owned and operated by the artist Valinda Miracle.  Valinda discovered a passion for pottery while recovering from injuries from a severe car accident.  The accident left her with limited mobility and short-term memory loss.  With her determination and love of art, Valinda learned to make pottery and begin to sell her pieces out of her restaurant.  She wrote a book about her journey titled “The dead doesn’t bleed. Those who are alive do.”.  She is a living miracle. 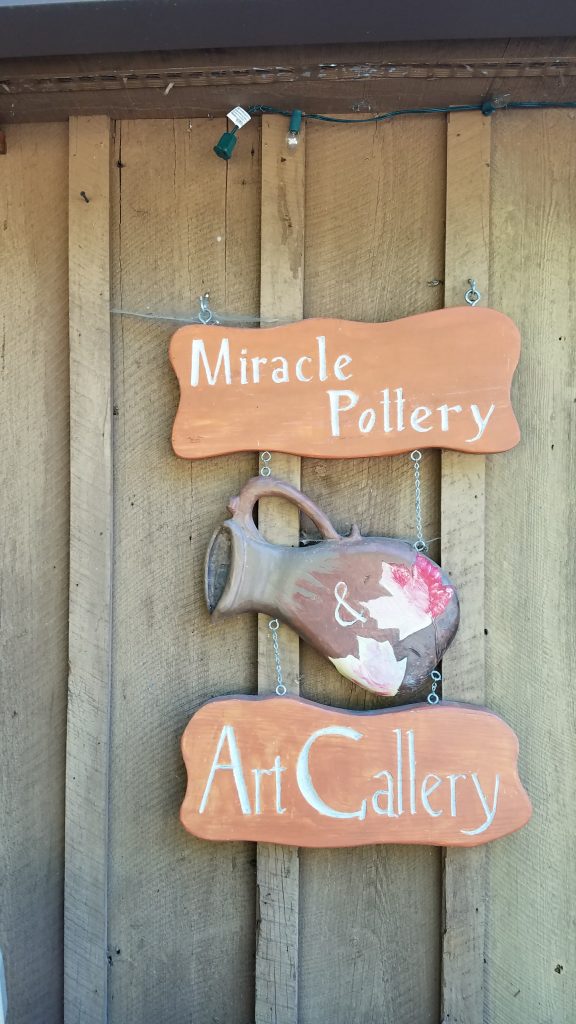 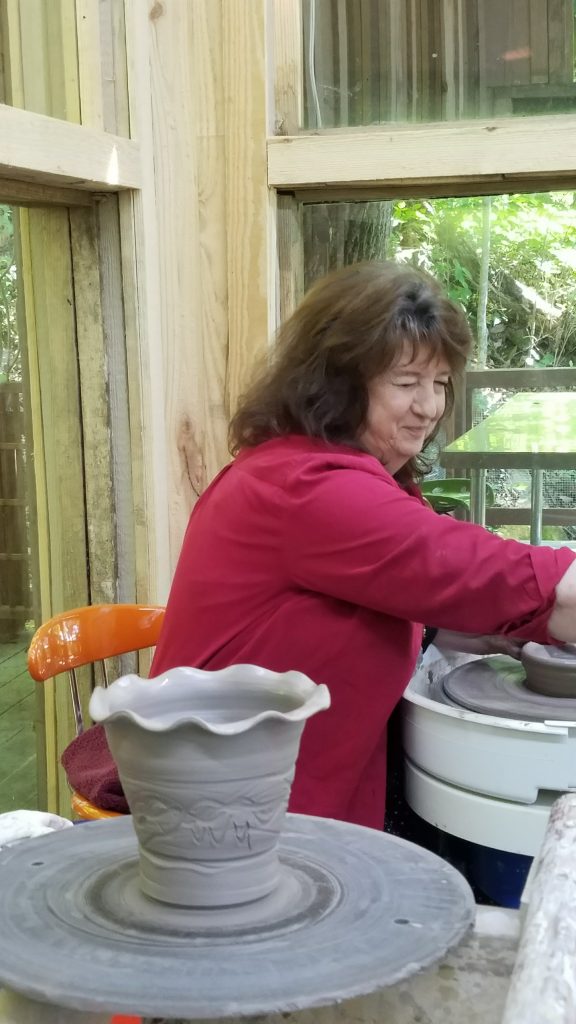 Valinda Miracle giving us a demonstration 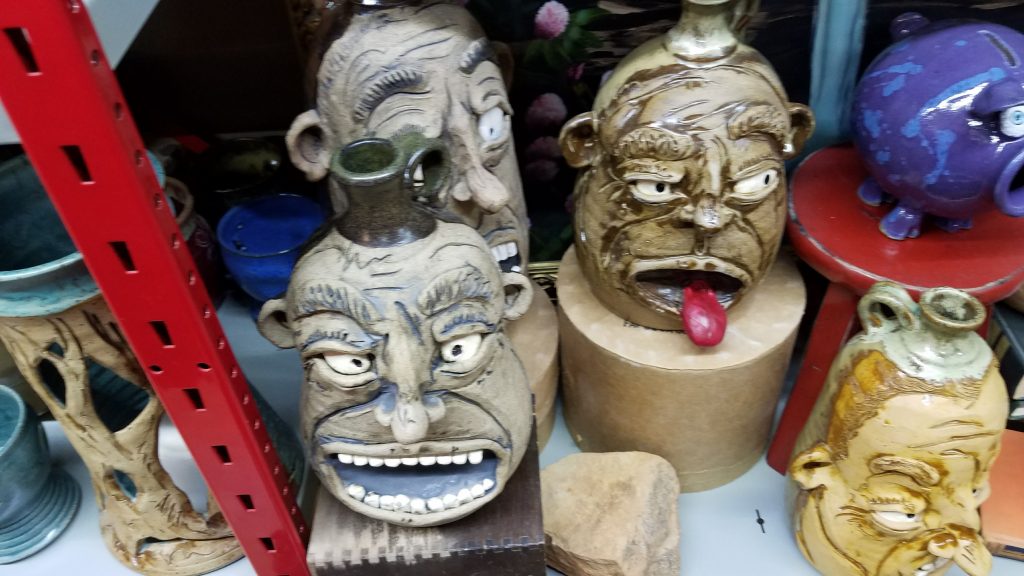 Next on the agenda is Desoto Falls.

The 107-foot waterfall is at DeSoto State Park on Lookout Mountain.  The falls are among the tallest and most visited waterfalls in Alabama and named after the Spanish explorer Hernando De Soto. Many people come to enjoy the lake, picnics, and hiking. 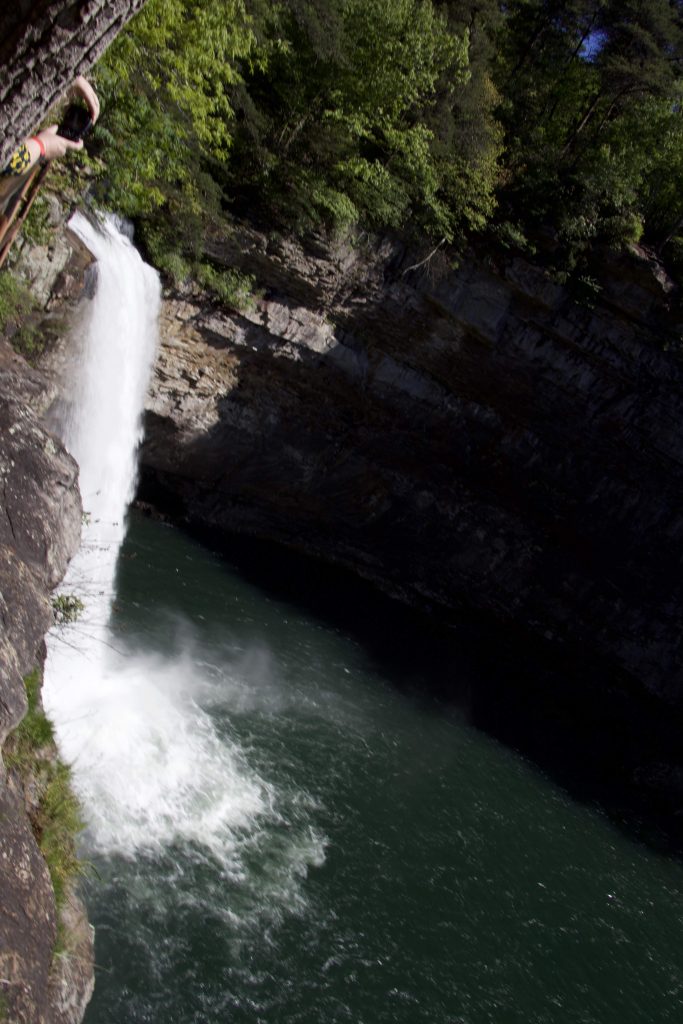 The next day we went to Scottsboro to shop the Unclaimed Baggage Center. I couldn’t help but notice that after two days in Dekalb county, we hadn’t encountered another person of color. The day was coming to an end, and we were all packing up to go; the organizer asked me what he thought about the trip. I wish I had more time, but I enjoyed it. It got quiet, and I thought this was the time to tell her what the driver in Huntsville told me. She genuinely seemed surprised.

She told me that the only racially motived incident she could remember happened a long time ago. When I got home, I looked it up. The event she was referring to happened in 1931 when nine black boys ranging the ages of 9-19 years old were falsely accused and convicted of raping two white women. My visit was short, but I did not witness anything that would stop me from revisiting this part of Alabama.

Lookout Mountain has something for everyone to enjoy

Thank You to the Unclaimed Baggage Center for hosting me.  All opinions expressed are my own. 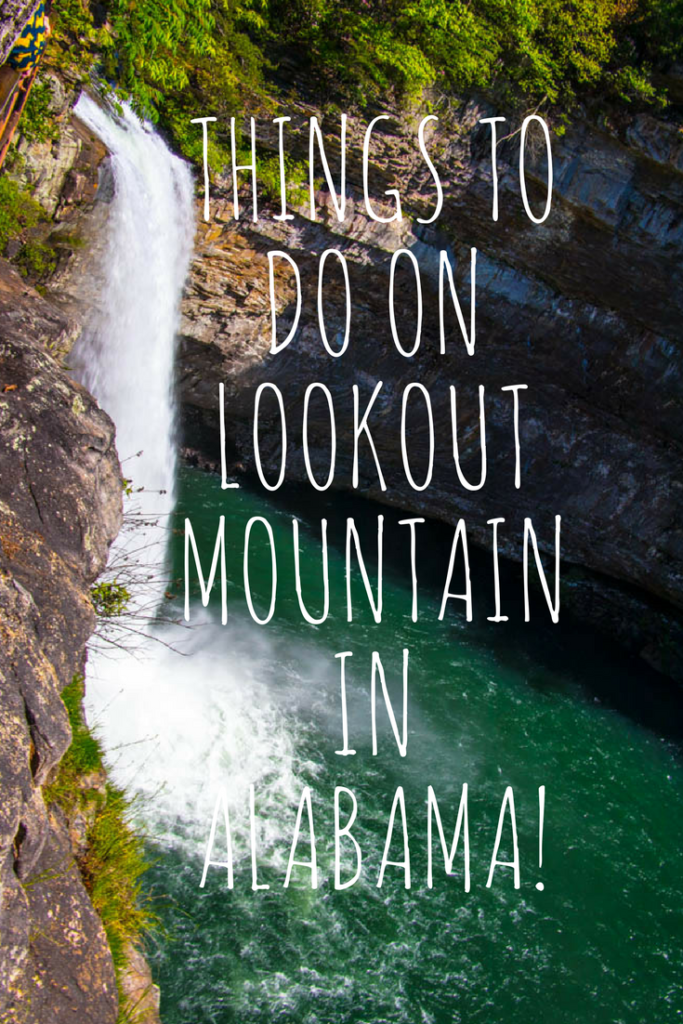