Photo Essay: The Many Faces of India 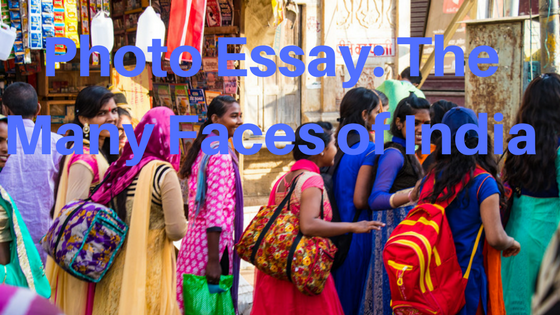 20 Nov Photo Essay: The Many Faces of India

Many people say you are either going to love India or you are going to hate India. It can sometimes be overwhelming, and you will see things that might shock you. What I remember the most is how welcoming and friendly the people are. My trip started in Delhi.

Lady is sweeping at the Red Fort.

This mother and daughter enjoyed the sites like we were and agreed to pose for us.

Lady in Green was sitting outside one of the monuments at the Red Fort.

We were standing around taking in the neighborhood of Nizamuddin Dargah, and I noticed that this man was staring at me. I don’t think he spoke much English. He asked our guide to ask me if he could take my picture. I said ok. After he snapped is shot I gestured could I take his. He would not look up from his cell phone. So I decided to take the picture anyway.

As we were walking through the neighborhood, children were running up and down the streets. Some of them stopped and staring at us. I spotted this little one watching us. I showed her my camera, hoping to get a smile of approval, but she didn’t run away, so I took that is the ok to snap the shot.

We were visiting the Mausoleum of Itimad-Ud-Daula, and these ladies were hanging out and were kind enough to let us take their picture. I was glad two of them laughing.

On our first day in Jaipur, India, we walked down what is known as bangle alley. This little boy was just watching us with as much curiosity as we were about the new city.

One of the trip highlights was attending the camel fair in Pushkar, India. This guy was selling food to the patrons of the festival.

I don’t remember where I saw this guy. I think it was while we were walking in town.

Our last stop in India was to the city of Jodphur. Almost everybody has two-wheeled transportation. You can find entire families zipping through the streets on scooters.

While taking a bathroom break in the Meherangarh also known as the Jodhpur Fort, the little girl saw our cameras and told her mother she wanted us to take her picture. Then her brother jumped in.

After leaving the fort, we walked down into the town. I was astonished at how many people wanted their pictures taken. This lady was looking out her door and saw us and come out to let us get the shot.

As we were walking down the street, I saw her looking at us with a scowl on her face, so I didn’t dare take ask for a picture. But when we got closer one of the guy’s group asked to take her picture and she started to smile.

These boys were coming home from school and stopped and starting following us and asked me to take their picture. The one on the left wanted to see the results and gave me his stamp of approval.

India was everything I expected it to be and more. It can be overwhelming, frustrating and exciting all at once. Once you accept that there are no rules, that cows and people are roaming the streets together, and random people want to take your picture. This was my first time in India and hopefully not the last.