I had never traveled so much for pleasure in one year.  In April 2005 I got my first passport and my first stamp in London.  Then in September flew off to Paris, my dream destination.  Then 2 weeks later I’m back on the plane to Hawaii.  This was a dream.  People often wonder where I get the money to travel so much.  When there is a will there is a way.

When I first started thinking about my next trip I did a search of popular destinations for single people.  To my surprise Hawaii came up.  At this point I thought of Hawaii as a honeymoon destination or 20th anniversary trip.  Not for a single woman traveler.  Although the article said there are plenty of singles I figured it would be best to go with a group.  I did another search for travel groups for singles.  That’s when I found Singles in Paradise.  The company is based in Los Angeles.  I sent in email and found out the room options and made a deposit.  I was telling a coworker about the trip and she was interested in coming along so we planned to share a bedroom within a 2 bedroom condo.  She was coming from Chicago and I was coming from New York.  We made plans to meet in LA and wait together for our connecting flights to Hawaii.

When we finally arrived in Hawaii later that night, October 29, 2015, it was dark and we were driving a rental car along the Hawaiian coast.  Did I mention it was dark.  There were no street lights and I said I could do it.   Although I didn’t have a car in New York City and didn’t start driving on a regular basis until in my twenties which made about 5 years total at this point.  I’ve never been to Hawaii but how hard could it be right.  I was a little nervous.  We managed to not drive off a cliff and arrived at the hotel and to our rooms.

Our two roommates were already in the condo.  Our room was small and right by the front door and looked a little scary.  It had been such a long day.  After seeing the room my friend was ready to get back on the plane and go home.  It was too late to go anywhere and I said we should just get some sleep and figure things out tomorrow.

The rooms looked much better in the morning.  The beach was just steps away from our room.  We hadn’t plan anything on Sunday but we had a jammed pack week.  My friend had done her researched and got a guide book “Maui Revealed by Andrew Doughty”.  The tour group had optional activities you could sign up for an additional cost but we used the books suggestions.

Our first activity was horseback riding down into the crater of Haleakala in Haleakala National Park.  I had never ridden a horse before.  I really didn’t think it through that my first time would be starting at 10,000 feet in the sky.  I almost missed out because I also didn’t realize it was freezing cold on top of that mountain.  Luckily our guide was able to lone me the green pants and blue jacket I was wearing or I was going to be able to go as planned.  I got matched with a horse named Bubba.  He was obviously a more mature horse.  We got on the trail and I was terrified.  I think I almost killed me and bubba a few times, because I didn’t trust him.  About half way through I realized Bubba knew where he was going.  I also thought this ride was at most 3 hours but it turned into more like 6 hours.  I wasn’t having a good day.  Once we arrived down inside the crater and the sun was burning my forehead I could enjoy the beauty.  We also had lunch.  I was much more trusting of Bubba by the end of the day. 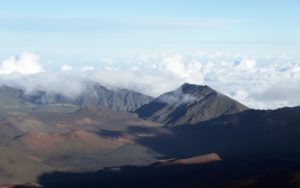 By the time we got back to the condo we were beat.  It was Halloween and Maui was known for their Halloween celebration on the island.  We looked at each other and said pass.

The next day we decided lounge around the condo and then meet up with the group for a boat ride that evening.  It was fun.  A lot more relaxing then the day before.

By the third day it was time for a Luau.  I as excited to wear flowers in my hair 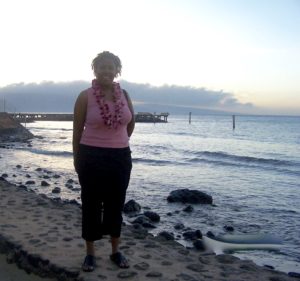 and learn about the Hawaiian culture.  The ceremony included roasting of the pig in the sand and dances.  So far we were pleased with everything the book suggested.

On our next to final full day we drove the highly recommended road to Hana.  The drive to Hana is one of the most scenic routes in Maui.  It had waterfalls, black sand beaches and trees.  At the end we were going to do something a little more adventurous, power hang gliding and then spend the night.  At this point I had skydived and gone bungy jumping so this was the new challenge.  We bought the CD, popped it in and hit the road.  We stopped and took plenty of pictures and made it to the small airport just in time for our flight.  It was a lot of fun and I would definitely do something like that again.

We were done earlier than we thought and decided to cancel our hotel room and head back to our condo on the other side of the island.  We made good time and went out for dinner.

This was our final day in Maui and the weather all week was perfect.  I decided to stay in enjoy the view from the balcony and my friend went to the beach to get some sun.  Maui proved to be a fun destination that singles could enjoy as well as couples.