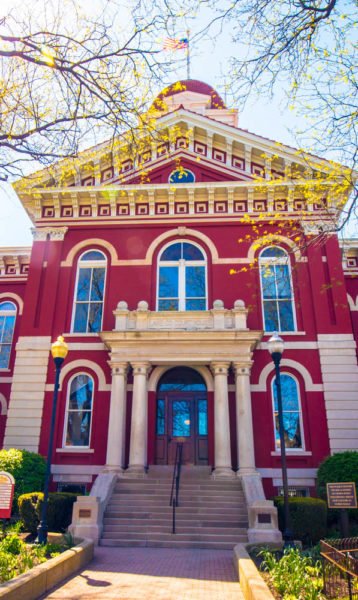 I’ve driven past this building a couple of times and wondered about its history.  It wasn’t until the 30 Places in 30 days local travel challenge that I finally stopped and went inside.  This challenge gave me the perfect excuse to explore close to home in Northwest Indiana.  Something I rarely do.  I searched historical buildings in my area, and that’s when I saw the Lake County Courthouse affectionately named “The Grand Old Lady” on the list.

History of the Courthouse

The Grand Old Lady, built in 1878 and designed by J.C. Cochran of Chicago. It operated as the Lake County Indiana Courthouse until the 1970’s.  The current more modern courthouse is located two miles down the road.  After the change in ownership, the new owners were threatening to tear down the courthouse to make room for a parking lot.  Then the Lake County Historical Society took over and restored the Georgian and Romanesque style building back to its original decor and still maintains the property today.

Stairwell leading to the second-floor courtroom

Stenciling on the hallway walls

Up until recently, cases were still being heard in the second-floor courtroom.  The room now is used mostly for wedding ceremonies, formal functions, and neighborhood theater productions.

What used to be the Treasurer and Auditors offices is now being used as a reception space.  There was a wedding going on the next day, so I wasn’t able to go in.  I did peek through the window and saw the room still had the original hardwood floors.  Brass chandeliers

Entry to the Maki Room where receptions are held

The lower level of the building is home to several specialty shops such as a record store, children’s toys, a restaurant, and a candy store.  The doors and windows of the shops have iron bars resembling jail cells, mimicking what the rooms were once used for in the early years for criminals what for their day in court.

Also, in the level lever is the Lake County Historical Society Museum and John Dillinger Museum. Admission to the Historical Society Museum is free on Thursday, Friday, and Saturday from May through October.  Admission is $4 into the Dillinger Museum, where you can learn about the life and death of Dillinger, with interactive video and newspaper articles.  The reason the museum in is Crown Point Indiana because it was the last jail Dillinger escaped from before his death in 1934 in Chicago.  The jail was a block away from the courthouse in the Sheriff’s house where Dillinger tied up an officer and stole his car along with another prisoner using a wooden gun.  After the escape, he was named “Public Enemy #1”.  It was suspected that Dillinger had help by the town’s first female sheriff, but she was later cleared of any wrong doings. The museum houses the original headstone from Dillinger’s grave in Indianapolis Indiana.

The gravestone had to be replaced in 1950’s because fans of Dillinger visiting his grave would take pieces of the stone as souvenirs.

The Grand Old Lady will not disappoint with its charm and history.  It is a must-see for people who enjoy history and architecture or a family day out together.

If you enjoy it, pin it.