If you asked me as a teenager what country I dreamed of visiting it would have been Paris.  I was in love with Paris so much that I took two years of French in high school.  Now how much I remembered is another thing.  Learning the language is not as easy as I thought it would be.  I thought my love for the country would help the words roll off my tongue easier.  I was so wrong.  I didn’t know that I wouldn’t go to Paris until over a decade later.  So, of course, I needed a refresher course.  I found it even more difficult than the first time.

Now it’s 2005 and a few months after I went to London my friend Suzen invited me to meet her in Paris.  This was the dream I’d been waiting for.  I picked up a Learn to speak French CD and starting preparing.  Unfortunately by the time the trip came in October all I could remember was

je m’appelle – My name is Bisa

J’Parle pas Francais – I do not speak French.

Je suis American –  I am American

Which was pretty much the same phrases I remembered from high school.  I was assured that I would find plenty of people who spoke English.  So I got on a plane and flew to Paris.  I arrived in the afternoon to meet up with my friend again.  The first thing 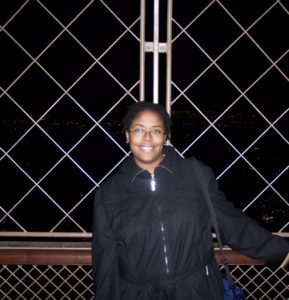 On Top of Eiffel Tower

What I do in Paris is go up to the top of the Eiffel Tower.  On Top of Eiffel Tower, It was surreal that I was in Paris.  2005 was becoming a year to remember.  I began the year without a passport, and I have two passport stamps in it.  The next day the real touring was to begin.  We were taking a bike tour around the city.  I’ve never done something like that before.  I would ride my bike in the US once a year.  I imagined myself as an experienced cyclist, which is far from the truth.  I was happy to see the bikes.  I was afraid it was going to be big mountain bikes, and I would be lagging behind the group.  This was such an amazing experience.  We got to see Paris in such a different way.  I did finally get to see the Eiffel Tower in the daytime.  We had just the right amount of breaks, and the tour included lunch.  The tour was also good at this stage of the trip because I could get information about the sites before I visit them.

I spent most of the trip exploring on my own and meeting up with my friend for dinner.  The first day I spent most of the day on the Avenue of Champs Elysees and climbing to the top of the Arc de Triomphe.  This was the thing I was most excited to see.  I had written about it in a class once and just loved saying “Arc de Triomphe” in my fake accent.

The next day I spent at the Louvre.  It was crowded and much bigger than I imagined.  I did get to see the Mona Lisa.  There was a line to see it and didn’t spend much time there.  I didn’t do a guided tour but wish I had at list gotten the self-guided tour on headsets.  Maybe next time.

My final day was spent at the Sacre-Coeur Basilica in Montmartre.  I didn’t go to the church, but I did pick up my souvenirs for family nearby and take in the view. 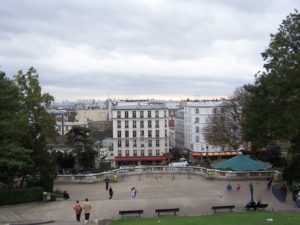 Someone came up to me while I was walking around and asked did I speak French.  I quickly thought this is my chance to speak in French and all I could say was no.

I have to admit that I wasn’t in love with French food as I thought I would be.  I found myself looking for a McDonald’s by the last day.  I never eat McDonald’s.  I spent three years working at the fast food restaurant in high school and had since stopped eating red meat.  There is always french fries and Fish Filet.  I do however love the sweet treats such as crepes and chocolate croissants.  I indulged for at least one of them a day while I was there.

Now it was time for me to go back home.  I never found those people who spoke English.  I think some just didn’t want to be bothered.  I do plan to visit Paris again someday explore more of the country.